Also, it was obvious that care was taken to provide the user with plenty of information on the products on the company website, and that it was more than just a business. I wanted to know who was behind the brand with the subtle natural scents and pretty packaging, whose message resonated with a passion.

Susie Wang, the founder of 100% Pure, took the time to answer my questions.

This is why she launched her own skin care line in 2005, based on natural products:

SW- During college I invented a way to stabilize natural ingredients from oxidizing in skincare products so I patented the process.  Some of the world's largest cosmetic companies asked me to formulate and develop products for them.  This was my dream job, so I put school on hiatus and began working on formulas and product development for some of the world’s largest cosmetic companies.  It was during this time when I learned of the dangers of some chemicals in cosmetics.  One day in the lab, I accidentally spilled a chemical onto the lab table and it literally warped the hard plastic lab counter.  I later discovered a lot of the chemicals are toxic and cancer causing.  That's when I decided to launch a healthy, pure, nourishing line that's much better for women than the harsh chemical alternatives.

LCL- What have been your greatest challenges and how have you overcome them?

SW- The biggest challenge has been hiring the right people. In the beginning, I didn't know how to hire well and I have had some really strange employees.  I have since implemented background checks on everyone and have made it mandatory for my fiancé, who is also my business partner, to have to approve as well.

LCL- What are the biggest rewards that 100% Pure has given you?

SW- Being honest to women – helping them not pollute their skin, their blood stream and instead, nourishing them. And that we have the resources to help animals.

SW- One day, I’d like to launch an animal sanctuary to help animals that nobody wants, where they can live and have a good life.  I would also love to see more of the world.  I've been to many places in Asia and Europe but I'd love to see Africa, the Amazon, India, Australia and South America.

LCL- What would you say to others who would like to realize their own dream?

SW- I would highly encourage it! There is nothing more rewarding than to do what you love.  It's worse to live your whole life and not even try to achieve your dream.  It's better to at least try.

I’ve sampled a few of 100% Pure products for a while now and here are my personal favorites:

Skin Brightening Collection – Great for reviving dull skin. The foaming cleanser is soft and energizing, the scrub+mask is an instant pick-me-up and the night balm is nourishing and calming. Tip: warm the night balm by rubbing your fingers together and then apply. It has a thick consistency and needs to be used sparingly. I am in love with this line.

Organic Cucumber Eye Cream Gel – I love the scent, the consistency and that it has twice as much in the bottle as your regular eye cream. It brightens the eye area but is absorbed quickly.

Blood Orange Body Butter – Another top pick. The scent is energizing without being overpowering. The consistency is thick and also needs to be warmed with your hands before applying. It feels nourishing and gives skin a healthy glow.

Fruit Pigmented Luminescent Powder – Somewhere between a bronzer and a blush it gives just enough luminescence to brighten your complexion without looking overdone. Love it!

To purchase 100% Pure in Europe:
www.100percentpure.eu

If you enjoy this blog follow me on Facebook or Twitter. Read my articles on Mamiverse.
Diario del Éxito (Success Diaries) will be published in book form late in 2011 by ediciones Obelisco. To read about my books: www.lorrainecladish.com
Posted by Lorraine C. Ladish at 8:36 PM No comments:

Communism and the Art of Motorcycle Maintenance, by Phillippe Diederich 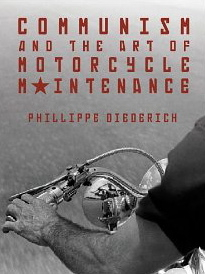 Passion and attention to detail beget art.
Communism and the Art of Motorcycle Maintenance, is the result of a photojournalist’s drive to capture the detail of the lives of Cuban Harlistas – Cuban Harley-Davidson bikers – in Havana, in the 90’s.

The essay describes the dusty yet rich subculture of Harlistas making do with every-day materials to build their bike parts to fix and customize vintage Harleys. The pictures in black and white describe the world of a unique subculture that Cuba and vintage Harley-Davidson fans will enjoy.

The photographs were exhibited in the Southeast Museum of Photography at Daytona Beach under the title of ¡Harlista! Motorcycle Culture in Cuba Today.
Communism and the Art of Motorcycle Maintenance is also published in the Traveler’s Tales Anthology, Cuba, available at Barnes&Noble and other outlets.

Phillippe Diederich spent fifteen years working as a photojournalist, covering news and events in the U.S. and Latin America for national and international publications such as The New York Times, Time Magazine and The Atlantic.

His essays, short stories and journalism have been published in The Miami New Times, Cigar Aficionado and The Houston Literary Review. He now teaches photography at Ringling College of Art and Design and is working towards an MFA in writing, while writing fiction.

Communism and the Art of Motorcycle Maintenance is now available on Kindle, by Six Volts Publishing, and soon on Ibooks (Itunes). Design and Layout by Barbara Gillespie.

If you enjoy this blog follow me on Facebook or Twitter.
Diario del Éxito (Success Diaries) will be published in book form late in 2011 by ediciones Obelisco. To read about my books: www.lorrainecladish.com
Posted by Lorraine C. Ladish at 8:51 AM No comments: 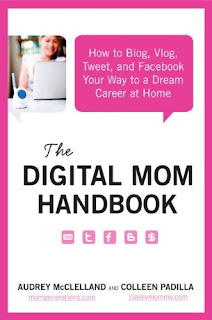 Can you make money blogging? You bet! Audrey McClelland of Momgenerations.com and Colleen Padilla, of Classymommy.com are proof of it. Their successfully monetized sites gave way to their book The Digital Mom Handbook, recently published by Harper Collins.

In a no-frills down to earth tone, these real-life moms tell how they started posting to an audience of one: their own mother or mother in law, and gradually built their respective audiences until they started getting swag – free products for review, trips and other incentives – and, eventually, paid advertisers.

They never promise that mom bloggers can monetize their blogs overnight and become success stories like themselves, and they do state that they made 0 dollars in their first years of posting daily – sometimes several times a day!

Some of their tips:

This book is not only for mom bloggers, but also for any woman who would like to start a blog and monetize it but has no idea how to go about it.

Posted by Lorraine C. Ladish at 1:10 PM No comments:

Make-up to Look and Feel Better 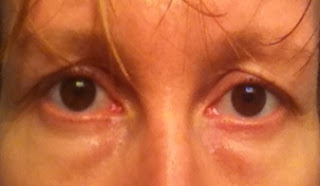 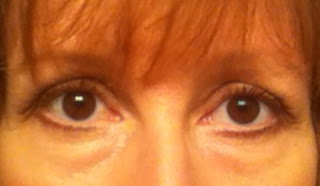 When we look at photos in magazines we may feel that we don´t measure up to the glamorous celebs. Then, of course there are the tabloid pictures in which they criticize the same celebs for having under-eye circles, blotchy skin or wrinkles, when photographed without makeup.

A little makeup goes a long way in making any woman look perkier and, to prove this, I´m including pictures of my eyes before and after makeup (right after a run and a shower). They are both taken with the same bathroom light, and are not retouched or enhanced in any way.

Time taken to apply makeup: 10 minutes (I did my whole face but I wanted to see the difference in the eyes, the mirror to the soul!). The second picture is taken just a few minutes after the first.

Almost all the products I´m wearing are by It Cosmetics, which I received samples of to test. I only used here those that have given me the best results in the last few days.

Under the eyes: Bye Bye Under Eye Concealer in Neutral Medium (it´s waterproof and must be used veeeeery sparingly).

On eyelids: Bye Bye Lid Lines as a primer and Brow Power Lift as an illuminator (that did away with the redness).

On complexion, Clinique Workout Makeup in Bisque and over it all, Bye Bye Pores, to set the concealer and foundation (I loved this translucent powder).

I used the It Cosmetics neutral eye shadow palette also as eyeliner.

The mascara is an all time classic: Maybelline Great Lash in brown/black.

I do invest ten to fifteen minutes a day in applying makeup, because looking better makes me feel better and that, is priceless.

Posted by Lorraine C. Ladish at 8:50 AM No comments: