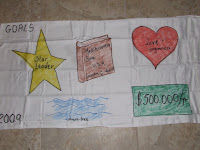 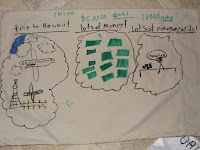 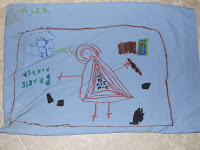 Two days ago, I did a project with my daughters who are 7 and 4 years old. We each took a pillow-case and fabric markers. We agreed that the only rules were to share the markers (this is a biggie at certain ages, if not all!!), and we all had to draw pictures of our dreams, which would then turn into goals.
Above is my own pillow-case at the top, my 7 year-old's in the middle and my 4 year-old's dream pillow-case is last but not least.
Of course my baby focuses on Barbies and having fun, my 7 year-old already has money as a goal (she knows a tad more about life than I would wish for her at her age), and I drew my own clear-cut adult goals: making the next rank in my jewelry biz., publishing my next book in the U.S., reaching a certain income level, destressing as a way of life and loving and forgiving others (and myself) on a daily basis ...
What was the purpose of this exercise? To focus on three or four things we have as goals for this year, and see them every single time we lay our head on our pillows at night before falling asleep.
There is no magic involved in this, mind you!
This has worked for me in the past, and what it does is keep my goals present and fresh in my mind, in order for me to be reminded to take the ACTION required to achieve them.
16 years ago, when I was writing my first book, I made a mock cover of the published book .... I used to look up at it when I was writing and would carry it with me everywhere. Of course I wrote the book, made the calls, and took the action required to actually get it published. And yes, it was published. 16 years and 15 books later, I can say it works!
Now I am implementing it in every other area of my life where I feel I need to gain or regain focus.
And to reach my goals, as Jim Rohn says, I must become the person who will make those goals happen, or they will not persist. For instance: I run because I am a runner, I write because I am a writer and I nurture because I am a mother ...
What reminders do you use to keep your goals fresh?
Posted by Lorraine C. Ladish at 6:32 AM No comments:

I can't afford NOT to pursue my passions

I cannot afford NOT to pursue my passions. In fact, pursuing them became a way of life for me many a year ago, overcoming all kinds of obstacles to become the person I was meant to be. When doing something positive becomes a habit, such as exercise, writing, painting, dancing, rock climbing or whatever floats your boat ... NOT doing it gently kills your soul. At least, it kills mine.
I became a fitness instructor at 20, as a second best to dancing, because I thought I was rhythmically impaired. NOT! I discovered that on the job, and at 24 I pursued modern and jazz dancing, in classes way above my level (not by choice). I remember feeling too old (darn it, old at 24!?), and as though I would never ever be able to spin without keeling over, let alone dance a whole choreography. On day one, I excused myself from classes early, cried in the dressing room, and went home. But I returned to class. Day 2, day 3 and so on were similar. I kept coming back though, despite the fear of ridicule, of not being good enough, of being too old ... I eventually was PAID to dance - I guess that made me a professional dancer! But most important, it made me a WINNER because I didn´t quit.
Now, at 45, I dance LA Style Salsa, which allows me to take advantage of the jazz, modern and even fitness stunts I can still pull off. I can do double and triple spins, drops, and so many more things that enable me to simply flow with the music and be ME ... no worries, no concerns, just the music, my moves, and the flow with my dancing partner.
I decided to take a break from classes and social dancing "because of the financial crisis" last November, until I developed chest pains that drove me to the doctor. I was still working out: running, going to the gym when I could (and can), and walking on the beach. But the only time I don´t think at all is when I am dancing.
Diagnose: STRESS with capital letters.
Well, by the law of inertia ... I took myself back to class and social dancing, because I was making myself sick with anxiety by not pursuing one of my passions that is the healthiest pressure valve for me .... I simply cannot afford NOT to dance, especially in times of financial stress. It is cheaper than meds, therapy and the ER. My kids love who I am when I´m high with endorfins after dancing!
Consider what things you have given up to "save money" and that may be costing you your health, mental and emotional sanity and your mood, which is a lot more expensive in the long run.
I feel alive again! So can you!
Posted by Lorraine C. Ladish at 8:54 PM 3 comments:

The light at the end of the tunnel

Guess what? You can get out of the tunnel RIGHT NOW. It has side doors! The side door is called ATTITUDE. And I don´t mean acting stuck up of course.
It is way too easy to stay in the dark and use it as an excuse not to get ahead in life, and not to live to your fullest potential. But it is also boring and lonley in there.
We blame the economy, a boss, a parent, a friend or an enemy for our circumstances. Ultimately, however, the responsibility is our own.
I started learning this in my twenties, while battling a long and severe eating disorder that I used as a scapegoat for many things from not having healthy relationships to being irresponsible.
However, and thanks to my perseverance, I found my way to a 12-step group that helped me realize that whereas I was not to blame for my illness (nor, in fact, was anyone else for that matter), I was fully responsible for overcoming it. And overcome it I did. It wasn´t easy, it wasn´t fast and to this day I can say it wasn´t a blast ...
But that eating disorder turned into my first and best-selling book so far, published in 1993, entitled "I Feel Fat" ("Me siento gorda", in Spanish), which is unfortunately not available in English. It turned into empathy, patience and understanding of people with addictions. It turned into STRENGTH.
Because I looked for a side door in that tunnel, today I know that if I was able to beat an eating disorder and help others know what it feels like to have one, and inspire them to overcome that, I can do ANYTHING!
Think of what you have overcome in life and how that proves you can overcome the challenges you are facing now or that may lie ahead ...
Posted by Lorraine C. Ladish at 1:45 PM No comments:

I will not be attending the National Pity Party ... 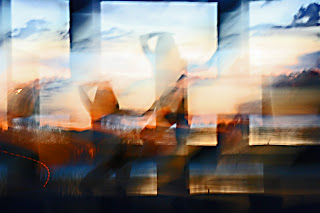 Ok, so we are in a recession. Big deal. Small deal. No deal. Not for me.
Don't get me wrong. My family's hurting! Unemployment has visited my family as well, and as I contemplate credit counseling, bankruptcy and shopping around for the nicest shelter in town, I refuse to turn my story into a pity party. I have two kids, 7 and 4, and I sometimes catch myself wondering if they could walk to school from the shelter if we end up in one?
I realize this IS a REAL possibility! It doesn´t only happen to others!
I'm not typing this from my penthouse at the Ritz, overlooking the ocean. I do live near the beach, but I have to drive there. That's while I can keep up with my car payments ...
Anyhow, despite the mess we're in, I'm taking responsibility for my part in it. What I did yesterday determines where I am today, and I know that my actions today will impact my future. And I want my future to look GOOD.
I'm a 14 (soon 15)-times published author, a proud and fit mother. But I´m broke. That´s me in a nutshell. When I set a goal, I tend to accomplish it. Now I am realizing that perhaps I should have set myself some financial goals a "few" years ago ... and then I would be successful in all areas of life, not just one or two.
Despite my current situation, I refuse to join the National Pity Party that is growing faster than the recession is! I am dusting myself off, and getting to work, in order to reach my family and financial goals as well as my career goals, which I have already accomplished.
In this blog, I will post positive proactive material, what I have done and will do to achieve my goals, in the hopes of inspiring YOU and YOU and perhaps YOU ... to take yourself on and send in your RSVP saying:
"I will not be attending the National Pity Party ...."
Now, let´s get going ...
Posted by Lorraine C. Ladish at 12:08 PM 3 comments: