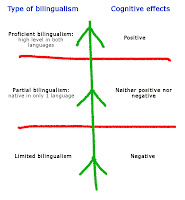 When I say I´m bilingual I don´t mean that I sort of speak two languages or that I have a good command of one but only read the other. I speak, read and write Spanish just as well as English. Not only that, but I´m bicultural and in my childhood I adopted a third culture. I´m American on my mother´s side, a Spaniard thanks to my dad and proficient in the British culture, having attended a British school for over 10 years. The bilingual advantage is huge, especially when it comes to having command of the two most widely spoken languages in the world (Chinese is a whole different story, since it´s spoken mainly in China).

Being successfully bilingual is not something I´ve achieved on my own, of course. I owe it to my dad, who also has this advantage. He owes that to himself, however, since he traveled to the U.S. when he was 16, went to college here and then was a university professor, after obtaining his PhD in Spain. When we moved from the U.S. to Spain my father, who is now a lexicographer (he compiles dictionaries single-handedly, without the help of teams or helpers), he took on the challenge of teaching my sister and me two languages and doing it well. The result is that I´ve made a good living as a language interpreter and that I´m able to translate a text in the same amount of time that it would take me to copy it in the original language. I can read the great American authors in English and the Spanish classics in Spanish.

Being bilingual and bicultural opens your mind, opens doors and even your heart. You are able to conceive of more concepts when you speak more than one language, since there are concepts that only exist in one language. You also “get” other bilingual and bicultural people. It´s a sub-culture that only the like-minded understand and builds instant rapport.

I now know how difficult it is to make your kids bilingual, because up until now I haven´t had the support, the time, energy nor the means to devote myself to teaching my kids Spanish the way they deserve to be taught. But, it´s not too late and I want them to have the same advantage that my dad gave to my brother, sisters and me.

Besides, my father, Delfín Carbonell Basset, has devoted his entire life to teaching English, with his learning system and his master classes. He is a great teacher, a rarity …

In an upcoming post I will speak about his blog On the English Language and his other successes that have nothing to do with my being bilingual.

If you speak more than one language, share that skill with your kids. It is the best gift you can give them!