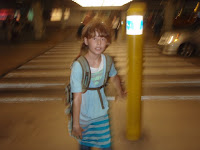 I love the poem by Khalil Gibran:
“Your children are not your children.
They are the sons and daughters of Life's longing for itself.
They come through you but not from you,
And though they are with you yet they belong not to you.”

And yet, it is our responsibility to help them be the best versions of themselves, to guide them through life, help them hopefully make the right choices and follow their dreams.

My kids are bicultural (Spain and the U.S plus a few more mixtures in their blood – Argentina, Sweden, England and Hungary) as both their parents are. Perhaps because since they were born I already had them boarding planes with me to visit friends and family in different countries, my eldest especially seems to have been bitten by the travel bug.

I live in Florida and one of my best friends in Seville, where my girls were born, offered a few months ago to pay my 9-year old´s ticket so she could spend part of the summer in Spain. I asked my daughter if she would like that, and warned her that she would be traveling alone. I talked to her father and we agreed that if she was ready to do this, so were we. Or we had to make ourselves be, for her sake!

And so yesterday, I followed what Khalil Gibran continues to say in the poem:

“You may give them your love but not your thoughts,
For they have their own thoughts.
You may house their bodies but not their souls,
For their souls dwell in the house of tomorrow,
which you cannot visit, not even in your dreams.
You may strive to be like them,
but seek not to make them like you.
For life goes not backward nor tarries with yesterday.”

I had to appease my kid’s aunts, uncles, grandparents and friends, who were concerned about such a young child crossing the Atlantic without either of her parents. I did not let my girl know that I thought I might cry when I saw her cross the boarding gates. She thought it was all pretty normal. If she was scared, she turned it into excitement and took the leap anyway.

She went to Spain to soak up her other culture, to improve her Spanish, to spend time with her friends and family, to enjoy herself and to do what life is for: live it as if it were the last day.

And so, my 9-year old called me when she landed in Madrid and then in Seville, to let me know she had made friends with other kids flying solo on the planes, she had fun even when she missed her connecting flight, she already spoke to me in Spanish (again, as she used to), and by hearing the adventurous tone in her voice, I knew I had done the right thing.

“You are the bows from which your children
as living arrows are sent forth.
The archer sees the mark upon the path of the infinite,
and He bends you with His might
that His arrows may go swift and far.
Let your bending in the archer's hand be for gladness;
For even as He loves the arrow that flies,
so He loves also the bow that is stable.”

So, here I am, my daughter´s rock, but also her bow, waiting for her to call again and let me know what she is feeling. I´m proud that at 9 she has had more life experiences than I had even by the age of 20. I have no plans for her other than to give her wings to fly. I will help her map out the destination, but the choice of where to go will be ultimately hers.